have managed to establish a higher standard of living over the past twenty years. It is good to note that Mauritius has been an exception to the rule, thereby showing an outperformance among the African countries. Without any natural resources, a small domestic market and open to trade economy, Mauritius exhibited several characteristics very typical compared to the African Economies namely a monocrop economy, development in the manufacturing sector and diversification towards the services sector. Contradicting the predictions of Nobel Prize recipient James Meade, who famously predicted that Mauritius would be bounded by poor development in 1961 due to its weaknesses pertaining to both weather and price instabilities and a high concentration of the labour force in the sugar sector, Mauritius has transformed itself from a poor sugar-based economy into a country with one of the highest per capita incomes among African countries. Today, the small island nation is one of Africa’s most prosperous and stable economies and is considered as The Mauritian Miracle. According to Larry W. Bowman, experts in Mauritius, there have been four development aims of the economy into the 1990s, namely: “modernising the sugar sector, expanding and diversifying manufacturing infrastructure, diversifying agriculture, and developing tourism.” Arguably, between 1977 and 2009, real GDP in Mauritius grew on average by 5.1 percent annually, compared with 3.2 percent for SSA countries.

Overview of the Mauritian Economy

Since its independence on 12th March 1968, Mauritius has been through several phenomenal evolutions. The Mauritian economy has now moved from a primary sector characterised by unemployment and faced because exportation has been only for sugar which has contributed to a reasonably flourishing economy. In 1975, the Sugar Protocol has come to an end with the price for raw sugar being at its highest ever recorded price of £648 and this price was thrice as that proposed by the European Commission. Consequently, as nearly all concerned economies favour to diminish its quantity it employs to supply to the UK in accordance to the Commonwealth Sugar Agreement, the economy of Mauritius, on the other hand determines in augmenting 100,000 tones of its supply of raw sugar. This has been a planned policy decision for Mauritius to gain on longer-term expected and steady export earnings whilst sacrificing shorter-term decidedly vulnerable world market conditions. Apart from the sugar boom, other poles of development such as the manufacturing and tourism sectors have been the next target for the continuous growth of the nation.

However, in the late 1970s, worsening of the economic conditions began. Petroleum charges escalated, the sugar boom took its end and the balance of payments deficit progressively climbed as imports outpaced exports. By 1979, the BOP shortage totaled to a shocking US$111 million. Accordingly, Mauritius came up to the International Monetary Fund (IMF) and the World Bank for financial aids whereby the state furthermore arranged for some measures, like cutting food subsidies, devaluing the currency, and limiting government wage augmentations, thus causing a big break in the Mauritian trade.

During the 1970s, the government passes the Export Processing Zone (EPZ) Act whereby it grants incentive and concessions to businesses sending abroad their commodities. The EPZ has been a successful one, proving better than the sugar sector as being the most important export-earning sector. The employment rate rises due to the fact of more people being employed that in the sugar sector. Mauritius experiences its first trade surplus in 1986. There has been a parallel increase in the number of hotel beds and air flights as tourism expands. There was this feel of optimism in the atmosphere at the same time the nation’s economic success encouraged comparisons with other Asian economies which were vigorous too, including Hong Kong, Singapore, Taiwan, and the Republic of Korea (South Korea). While Mauritius loses sugar preferences in 2004, the Multi fibre agreement ends in 2005 while African Growth and Opportunity Act (AGOA) preferences phases out in 2012.

The Mauritian economy has been somewhat victorious in expanding its economic activities by shifting from its dependence on mainly sugar and textiles into a nation supplying financial intermediation, management consultancy and Information Communication Technology (ICT) services. Agriculture may be imperative to the Mauritian economy but it no longer governs around. Its share in real GDP has fallen from around 12% in 1990 to approximately 4% at present. On the other hand, the service sector is heavily composed of tourism along with financial services which is now the most important pillars in the economy of around 74% of real GDP.

During the Financial crisis impacting in the middle of 2007 and into 2008 in the US, Ramlall (2009) finds that the main index of the Mauritius stock market has been affected whereby SEMDEX happens to be more vulnerable to changes in international stock markets. He additionally explains on the retreat by foreigners done throughout the crisis on the back of undermined international portfolio diversification. Nonetheless, risks deepen as the crisis persistently lead to an economic instability. Consequently, the banking sector remains susceptible to drop in income and debt servicing capacities in addition to difficulties faced by the sectors which are pillars to the economy. Mauritius being a member of the Southern African Development Community (SADC) has joined in through August 2005 along with several other African nations whereby the latter has approved to macroeconomic convergence criteria and goals for nations in the region. It has been noted that convergence goals have been positioned for 2008, 2012, 2015 and 2018, with demanding goals set for the other periods whereby the Ministers of Finance being member of the SADC have approved of this. For 2008, SADC forecasts its members to have single-digit inflation rates, budget deficit being less than 5% of GDP, nominal value of public and publicly guaranteed debt as a ratio of GDP should not go beyond 60%, foreign reserves equating to three months’ imports and central bank credit to the state being less than 10% of the preceding year’s tax income –Mboweni (2003).

Next, Mauritius is as well a member of the Common Market for Eastern and Southern Africa (COMESA) along with other 18 African countries. It is known that the COMESA Treaty, setting the agenda for COMESA, envelops a great figure of sectors and activities. Nonetheless, the realisation of the whole COMESA mandate is seen as being a long-term objective. Adding more, for the latter to be greatly effective as an organisation, it has characterised its main concerns within its mandate such that the “Promotion of Regional Integration through Trade and Investment”. The aims and objectives of COMESA are, consequently, to aid in the elimination of the structural and institutional flaws of member States to permit them to accomplish collective and continued development. Mauritius has held up well against the unrelenting global economic crisis, even though its growth momentum has alleviated where the real GDP growth rate projected at 3.3% in 2012 down from 3.8% in 2011. Anticipations for 2013 and 2014 show a slow but sure improvement with growth rates mounting to 3.8% and 4.2% respectively. Public Finance Management (PFM) systems and institutions are normally strong however more reforms are required to deal with emerging challenges associated to public sector competence and recent transparency concerns. Social and human capital progress is elevated and supported by healthy economic freedoms and a strong social welfare system. Nonetheless, further developments in education superiority and importance are looked for to boost the nation`s competitiveness.

Mauritius has been subject to numerous developments be it on economic or infrastructural grounds among others. The award goes to the level of openness to international horizon as well as to FDI that comes in and goes out of the country. As a matter of fact, this boost the competitiveness of Mauritius as a trading partner within each and every association that it belongs to. We measure trade openness by the ratio of exports plus imported divided by GDP ((X+M)/GDP) throughout our study. In the mid-1980s, the volume of imports grew at a rate of 8.7% as compared to that of exports which grew at a rate of only 5.4%, thus illustrating that Mauritius is an economy which heavily depends on the imports of goods. It is good to note that Mauritius is also known as a Net Food Importing Developing country. 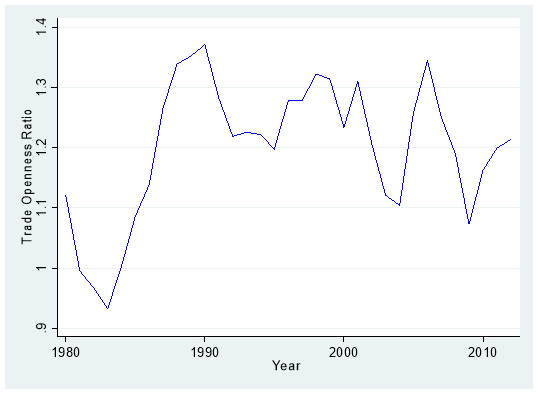 Mauritius has been an economy protected by tariffs and quotas in the 1970’s and the early 1980’s. On average, the rate of protection has been high and pretty much dispersed. This is inferred from the rather poor openness ratio of 0.9325 in 1983 as is shown in Figure 3.1 above. Following an openness strategy towards the world, an overall improvement in the openness ratio has been noted. However, fluctuations still exist. A rise in import for petroleum products results in the period 2004-2005 which contributes to a deficit in the trade balance. High oil prices in the world market and the depreciation of the rupee vis-à-vis the US dollar contributed massively towards the trade deficit.

Today, our small island is actively participating in the multilateral trading system and is a member of various economic groupings and trade agreements. Participation in regional agreements is crucial for Mauritius because such an act allows exploitation of comparative advantages and economies of scale, improves Mauritian’s competitive edge, allows diversification of exports and finally facilitates easy integration into the world economy.

Mauritius is known to have been running deficit in the visible trade balance which has been offset at times by surpluses on invisible trade account. Bulk exports of Mauritian goods (namely 70% of the total value) comprise of manufacturing products. Though decreasing in share, clothing remains the main manufactured export (from 57% in 2001 to 36% in recent years).

Sugar has remained the main agricultural export, contributing around 16% to total merchandise trade.

Imports as well continued to be dominated by manufactured goods. Leading imports include machinery and transport equipment, radio/television transmission apparatus, textile and chemicals. The share of textiles has decreased from 20% in 2001 to 7% in recent years.

The EU is the major destination for most of the Mauritian export. The bulk of Mauritian sugar  and a large share of its textiles and clothing are destined to the EU. The UK remains the major single destination followed by France and the US. On import grounds, the EU supplies around one third of the total value of Mauritius’ merchandise imports. Other major suppliers include China, South Africa, France, India and Germany. The share of Middle East countries (Bahrain, Saudi Arabia, and United Arab Emirates) has considerably increased, reflecting mainly the increase of oil prices. 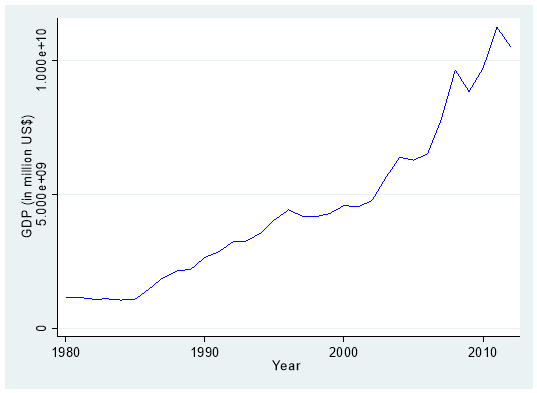 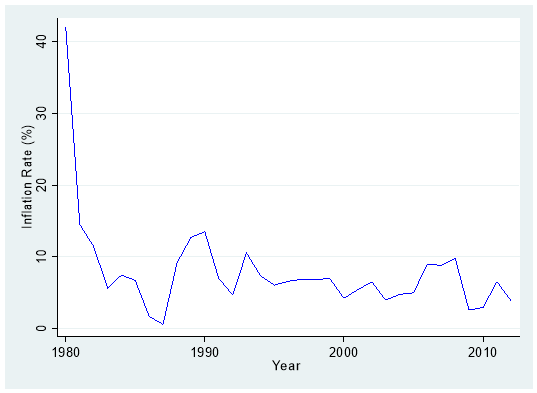 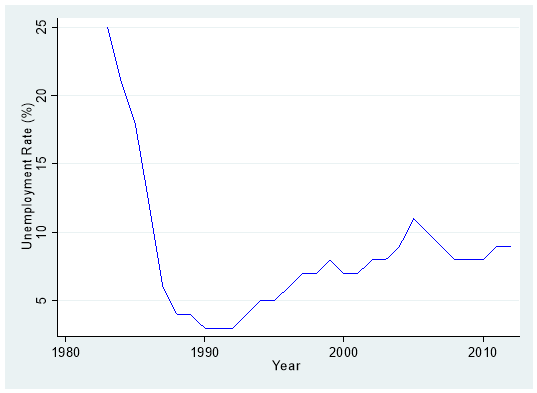 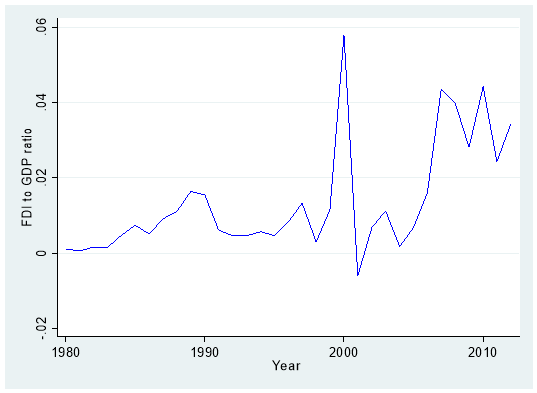