comparatively, the experience of Brazil and South Korea.

The Industrial Policy plan of a country, sometimes shortened IP, is its official strategic effort to encourage the development and growth of the manufacturing sector of the economy.There are role of government which takes measures “aimed at improving the competitiveness and capabilities of domestic firms and promoting structural transformation.” [4] A country’s infrastructure (transportation, telecommunications and energy industry) is a major part of the manufacturing sector that usually has a key role in IP 1.

What kinds of industrial policies are effective? One aspect of this question is whether governments should use industrial policies to make the most of their country’s current comparative advantage, or instead invest in higher-productivity industries that are not competitive in the short-term. According to Justin Yifu Lin, World Bank Chief Economist, where industrial policies fail this is “due mostly to governments’ inability to align their efforts with their country’s resource base and level of development” (Lin, 2010). For Lin, developing countries should first seek to profit from the (mostly labour- and resource-intensive) products and services that they are currently most competitive in. They will accumulate human and physical capital in the process. This capital, Lin argues, can be reinvested over time in more productive industries. An article in the ”The Economist” draws similar conclusions. Ha-Joon Chang, in contrast, argues that developing countries should defy their comparative advantage. For Chang, the cost of moving capital between industries (e.g. from sewing machines to car plants) means that countries should actively promote high-productivity industries at an early stage in their development.

Some argue that while manufacturing should be given special policy treatment, governments should not favour particular manufacturing industries (cf. UNIDO, 2011)2. One way to do this is by improving the infrastructure that manufacturers require, e.g. by promoting industrial clusters (UNIDO 2009). The creation of export-oriented Special Economic Zones is a well-known example of this. Critics argue that such an approach may only attract short-term investment, achieving little if any positive spillover into the wider economy (Good and Hughes, 2002 ).

Another question is which kinds of industrial policy are most effective in promoting economic development. For example, economists debate whether developing countries should focus on their comparative advantage by promoting mostly resource- andlabour-intensiveproducts and services, or invest inhigher-productivityindustries, which may only become competitive in the longer term. An example of typical industrial policy can be import-substitution-industrialization (ISI), where trade barriers are temporarily imposed on some key sectors, such as manufacturing. By selectively protecting certain industries, these industries are given time to learn (learning by doing) and upgrade. Once competitive enough, these restrictions are lifted to expose the selected industries to the international market.

ISI was most successful in countries with large populations and income levels which allowed for the consumption of locally produced products. Latin American countries such as Argentina, Brazil, Mexico, and (to a lesser extent) Chile, Uruguay and Venezuela, had the most success with ISI. The Brazilian ISI process, which occurred from 1930 until the end of the 1980s, involved in boosting exports and discouraging imports (thus promoting the consumption of locally manufactured products), as well as the adoption of different exchange rates for importing capital goods and for importing consumer goods. Moreover, government policies toward investment were not always opposed to foreign capital: the Brazilian industrialization process was based on: governmental, private, and foreign capital, the first being directed to infrastructure and heavy industry, the second to manufacturing consumer goods, and the third, to the production of durable goods (such as automobiles). Volkswagen, Ford, GM, and Mercedes all established production facilities in Brazil in the 1950s and 1960s.. Industrial policy covers many areas of policy. In the historical and comparative literature on the industrialization processes in East Asia and Latin America, the following areas of industrial policy have been persistently disputed: trade strategies, the role and extent of directed credits and subsidies, and innovation policies. In a country whose government has industrial policies, the market force is more or less distorted due to government intervention. It can also be the case that the government uses industrial policy to correct market distortion resulted from domestic monopoly. However, there is no uniformity in the essence or the extent of industrial policies. Different paths chosen by the governments lead to different patterns of industrial development. Even similar strategies could bring about different results when implemented under different environments. A scarcity of natural resources has motivated South Korea to look at its human capital as its biggest endowment, and the country has invested heavily in education, science and technology, and a “knowledge-based” economy. The South Korea is one of the few countries in the world that has managed radically to transform its domestic economy from one based on agriculture to that of a leading world industrial power, with a constant increase in income per capita and a high growth pattern (Figure 1). Industrialisation and the shift from light to heavy and chemical industries boosted the rising growth pattern and favoured a virtuous integration into foreign markets (Figure 2). 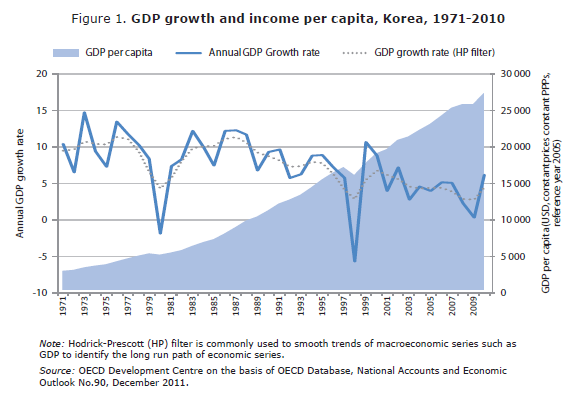 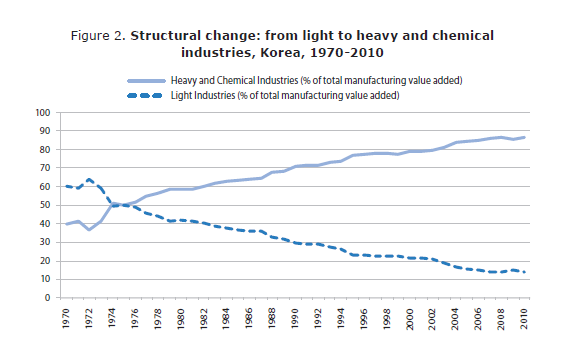 For many years, Brazil employed various policies to alter its productive structure in order to increase the participation of sectors believed to have great potential to generate economic growth. Behind these initiatives lay the idea that since the terms of exchange tend over time to deteriorate as far as agricultural production is concerned, it would be appropriate for developing countries to make an effort to industrialize, principally by imposing protectionist tariffs [Prebisch (1950) & Singer (1950)].1 The aim here is not to present a detailed report on Brazil’s industrial policy (IP, for now on) over the last few years [for this, see Suzigan (1995), Guimarães (1996) and Bonelli, Veiga & Brito (1997), Suzigan & Furtado (2006)], but rather to describe briefly the tools used to promote industry. Between the 50s and the 80s, various types of trade protection were basically used (import taxes and non-tariff barriers such as the examination of similarity, indices of nationalization, contingency mechanisms, import licensing, preference in government procurement), along with export stimulation (favored exchange rates for exports of manufactured goods and tax exemptions) and subsidies for production in selected sectors (tax exemption and reduction and acceleration of capital depreciation). Besides this, there was an intense flow of credit to sectors considered to be priority and the strong direct presence of the State in various productive activities. To all this, add the obstacles against adopting new technologies (the Information Technology Law (“Lei de Informática”), for example), large state investments in infrastructure (especially up to the late 70s) and expansion of higher education (principally as of the 70s). Brazilian industrial policy developed within the context of a paradigm shift in the relations between State and Society, in which the public sector sought to bring about a business environment favorable to productive investment, while the private sector busied itself with seeking out opportunities and making investments. Brazil’s Industrial, Technological and Foreign Trade Policy (PITCE), unveiled in March of 2004, has unique features which clearly distinguish it from previous policies. Its purpose is to bring increased efficiency and competitiveness to Brazilian companies and place them in international markets, thereby creating jobs and increasing incomes.

1 Nonetheless, it must be remembered that there is no consensus concerning deterioration of the terms of trade [see Hadass & Williamson (2001) for pertinent references]. On the other hand, Sarkar & Singer (1991) find indications that the terms of trade for exports of manufactured goods from developing countries also tend to deteriorate, which would justify the prescriptions set forth by Prebisch (1950) and Singer (1950) even in a more advanced stage of development.

2 These tools were not used with the same intensity in all periods. For further details, see Suzigan (1995)

If IP appeared to be successful in changing Brazil’s productive structure, there is no evidence that it managed to promote sustained growth over many years. Comparison with countries that found themselves in a similar stage of development is quite illustrative. We see that Brazil’s per capita income in the 60s was higher than many of the countries in East Asia, but during the 80s it was surpassed by all of them. By way of illustration, in 1980 Brazil’s per capita income was 131% of South Korea’s, 40% of Japan’s and 108% of Taiwan’s, whereas in 2000 it had dropped to 50% of South Korea’s, 28% of Japan’s and 39% of Taiwan’s (see Figure 1). 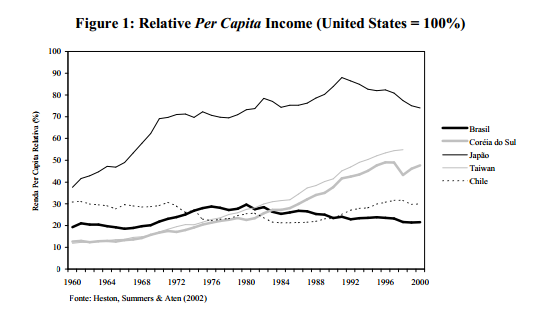 From the 90s on, a movement is perceived to open the economy and diminish the role of the State as entrepreneur. The impact of trade opening on industrial productivity has been widely documented [Ferreira & Rossi-Júnior (2003)], but this apparently was not translated into exceptionally high growth rates, especially if compared with previous periods (characterized by the intense use of vertical policies) or with the countries of East Asia (see Figure 1). This being so, many authors point to the performance of the Brazilian economy in the last fifteen years as evidence of the need to adopt sectorial policies [see Kupfer (2003), for example].