Woman in Bangladesh through Agriculture

The gender issue in developing countries again highlighted at the World Conference on Women in Beijing in 1995 (Hicks, 1997). Women’s work in the productive and social sectors is a key aspect of development. Everyone has a unique classification of empowerment based on his or her life experiences, behavior, and ambitions, person has the power to decide about their things, their life, and their actions can be identified as empowerment. Rao and Kelleher stated that “the capacity of women to be economically self-sufficient and self-reliant with control over decisions affecting their life options and freedom from violence” (Rao and Kelleher, 1995). The disempowerment of women reflects upon their less education level income, control over their own income, bargaining power in selling their own produce and labor. This susceptible condition ended an overall dependency of women on their male relatives through their life cycle particularly in developing countries which lowers their value of life in the society.

Bangladesh is a developing country, according to the United Nations Gender-related Development Index (GDI), Bangladesh ranked 105th out of a total of 177 countries worldwide (Grimm, Harttgen et al., 2008). A patriarchal social system dominate the life of women in Bangladesh, controls a women’s mobility, the roles and everyday jobs. In Bangladesh traditionally men dominate women in all spheres of life. The poor women in rural areas having the least power, have few rights, little choice about their lives, and very few chances to modification their condition. Women in Bangladesh in rural area are generally illiterate and often have the least to eat.

Figure – 1 The Ratio of economically active women working in agriculture, 1980-2010 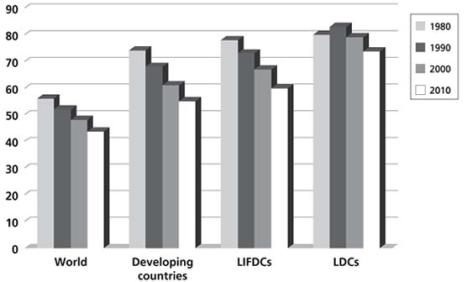 The female contribution to the overall economy in developing countries have particularly 43% of the agricultural labor force in developing countries in the agricultural sector like Bangladesh but societal and economic constraints limit their further inclusion in this field. (Food and Organization, 2011). Around 84% of the total population lives in rural areas where agriculture plays vital role in the economy, this sector comprises crops, forests, fisheries and livestock, Women’s involvement to agriculture considered as unpaid family labor, is grossly underestimated. Bangladesh is a traditional Muslim country where women are hardly participate in agricultural activities outside home (Hossain and Bayes, 2009). In Bangladesh the women’s agricultural activities limited to homestead production and post-harvest operations but in recent years they are mostly involved in livestock and poultry rearing activities besides crop production. In Bangladesh women’s contribution to socio-economic development were not noticeable, because of a set of social standards which allowed men to dominate women

Women’s contribution in agricultural production is processing and storage of grains and pulses with household based small-scale industry. Men specially worked in public space like the fields, roads and market place on the other hand restrictions prevent women from attending the market. The contribution of women remains socially invisible; control over the proceeds of their labor is transferred to male hands.

In the case of rice, which is the main crops in Bangladesh provides a significant example of this process. Main responsible for preparing the fields, sowing the seeds, weeding and harvesting are men also carried the harvest home and help in the threshing. Women then conquest the process the paddy into rice, includes parboiling and drying the paddy, and storing the grain. In Bangladesh women spent an average of 3.1 hours per day on agricultural work while men spent 5.1 hours (Zaman, 1995).

In Bangladesh the farm technologies are not adequately developed to handle although participation of women in agriculture increasing (Jaim and Hossain, 2011). Women’s role is changing from unpaid family worker to active worker which is called as “feminization of agriculture in the absence of male members in the family. Contribution of women in the agricultural sector has increased over time. Women’s work increased from 3.2 million in Survey 1985/86 to 21 million in Survey 1989 (Rahman and Routray, 1998). During 1999–2000 and 2005–06, the number has increased from 3.76 to 7.71 million (Asaduzzaman, 2010).

Women more likely to be involved in the agricultural sector who has poor households and risk of being food-insecure, because there’s earnings are important to their families’ survival.

Limited use of ownership, and control of productive physical and human capital emphasis on women’s ability to generate income in the agricultural sector. The disadvantage of Bangladeshi women relative to men with respect to assets brought to marriage, and human capital (Quisumbing, 2003). Women in Bangladesh lag behind in terms of education and the lack of education in adult women in Bangladesh live below half a dollar a day make them very poor (Ahmed, Hill et al., 2007)

Development in poultry created many employment opportunity in poultry industry and poultry related products. The revolution in poultry industry has achieved more than 200 percent growth last 5 years because of new technology.(Shamsuddoha, 2005) Poultry rearing can be considered as an alternative income generating activity for the development of rural women of Bangladesh.

Poultry farming is mostly homestead-based and contributes an important role to the agricultural sector in Bangladesh. Poultry rearing generates extra income for these families which is a part of agro-rearing practices of the village community of Bangladesh. Around 89% of the rural house-holds rear poultry (Fattah, 2000), mainly operated and managed by rural women on a small scale. Furthermore 70% of rural landless women are directly or indirectly involved in poultry rearing activities.

Family restrictions, social and traditional barriers keep rural women unable to work outside their home. For these difficult circumstances, homestead poultry rearing is considered the best way to add contribution to the household. It requires least land, small amount of investment and traditional knowledge. Now a day’s one of the main sources of income for the rural women of Bangladesh is home-based poultry. They have the opportunity to spend the earnings for children, special occasions even educating their children. extra income from home-based poultry rearing provides the survival of rural families which empowered by decision making process and gives them freedom to take part in making family decisions. (Hadi, 1997).

By increasing the food consumption and nutrient intake poultry projects help rural women (Nielsen, Roos et al., 2003). Now a days the growing awareness in Bangladesh is rural women can play a vital role to the socio-economic growth of the country and provide their families with a higher standard of living (Alam, 1997). In this way poultry rearing can provide significant benefits to rural women in Bangladesh which lead to better empowerment.

Bangladesh is the most promising countries for freshwater aquaculture industry which is second only to agriculture in the overall economy for its abundant water resources and sub-tropical climate conditions. Women are involved in various aspects of freshwater aquaculture activities like fish feeding, on-farm feed preparation, pond fertilization, stocking and harvesting. Women’s participation in the fish industry the production has increased by up to 20% (Ahmed and Toufique, 2014). Aquaculture related activities are very important for the empowerment of rural women in Bangladesh. Most rural women have the absence of technical knowledge in aquaculture, heavy household tasks and socio-cultural constraints such as mobility restriction keeps out women’s participation in aquaculture activities. For this contribution in aquaculture by women is under expectation. Economic, nutritional and social benefits are interlinked in order to empower rural women in Bangladesh. Women have generally improved their standard of living, purchasing power and ability as an economic actor which enhance their position in families. Women’s participation in aquaculture improve empowerment which give them greater equity, mobility, more control over resources and political awareness helps to reduce incidents of domestic violence .The expansion of small-scale aquaculture in rural Bangladesh, the women are now breaking through the traditional norms and able to come forward for participate in the development activities outside their homesteads.

Several rural women in Bangladesh have successfully adopted and developed with aquaculture production. They feed and harvest fish, also raise fry to yield fingerlings for stocking ponds, they are mainly responsible for the skilled and time consuming tasks that take place on-shore like making and mending nets, processing and marketing fish.

Women are previously engaged in coastal area of Bangladesh where shrimp farming is a dominant occupation. Nearly 85% of the women are involved in fry collecting which does not interfere with their day-to-day household work, and helps addition the household income.(Shelly and Costa, 2002).

Bangladesh is the most active NGO sector in the developing world, over 6000 registered NGOs are active and about 10 percent play a major role. (Rahman, 2006)

The NGOs works on many programs to develop women development and sustainable development in the society, raise the capacity of the women to participate in national, social and democratic processes and to participate in national and local business activities. Most of the sectors are agro based due to most of the women are still engaged with the agro-based sectors like paddy production, poultry farming, dairy farming etc.

In recent year a great percentage women in Bangladesh are both directly and indirectly involved in agricultural activities . In crop production activities women involvement is mostly related to managerial activities. Women friendly pre-harvest as well as post- harvest technologies for crop production and processing. Participation of women in Livestock and poultry production activities as well as in homestead gardening has gradually increased to a substantial extent. A women in Bangladesh feel more comfortable in agricultural activities. If a woman achieve capability in 80% or more of the weighted pointed as empowered

When economic activities incise the rural women benefit most in Bangladesh. Socioeconomic conditions rise within the households with increased participation in aquaculture, which give her increased decision-making power on household management and income making activities. Poverty is the main cause of difference in a rural phenomenon, for the impact of fisheries and aquaculture gender equity become very high. Most prominently visible economic benefits were able to originate from various activities has gained them suitable place in the decision making process.

Asaduzzaman, M. (2010). The next agricultural transition in Bangladesh: Which transition, why and how? conference on Understanding the Next Generation in Asia, Bangkok, April.

Fattah, K. A. (2000). Poultry as a tool in poverty eradication and promotion of gender equality.Frands Dolberg and Poul Henning Petersen (eds.) 10.

Hadi, A. (1997). The NGO intervention and womens empowerment--the Bangladesh experience.

Zaman, H. (1995). Patterns of activity and use of time in rural Bangladesh: class, gender, and seasonal variations. The Journal of Developing Areas: 371-388.