along its eastern seaboard, the PRC’s western interior is rapidly developing. In Sichuan province, Chengdu alone is now home to over 1,000 U.S. companies including General Electric and Mazda.[1]However, one of the most ambitious efforts to industrialize western China actually took place decades earlier. In a sweeping project known as the Third Front, central government planners reconfigured the economy of western provinces, with a special emphasis on defense industrialization. This paper provides an overview of the international factors that led to the creation of the Third Front and its key projects. Furthermore, it analyzes the economic strategies used by the Chinese government during this period to complete these projects.

The Third Front, or da sanxian, derives its name from a development concept put forward Mao confidant Lin Biao, who became Minister of Defense in 1959. In a speech in 1962 known as the “7,000 Cadres Conference”, Lin pushed for the military fortification of Anhui Province as a safety measure in case the government needed to retreat from its eastern seaboard.[2] While China faced a myriad of international crises during the 1960s, Lin’s speech was most concerned with a possible attack on mainland Chinese cities by Kuomintang (KMT) forces in the aftermath of the Great Leap Forward. In 1964, Mao himself played in active role in revising the 3rd Five Year Plan so that it would emphasize national defense.[3] The final version highlighted the threat of looming war and called for increased development in transport infrastructure, science and technology, and national defense.[4]

While Lin was focused on the KMT, Mao’s preoccupation was the growing American military presence in Southeast Asia. China scholar Barry Naughton is one of the leading researchers on the political economy of the Third Front. He identifies the Gulf of Tonkin incident, and subsequent start of the Vietnam War, as the primary catalyst for the acceleration of the Third Front development strategy.[5]From 1964 to 1971, the combination of defense concerns over the KMT, United States, and Soviet Union all created an environment politically conducive to intensive defense development.

The primary objective of the Third Front was establish an entirely self-sufficient industrial base that China could rely on in the event of war. If eastern coastal cities like Shanghai were attacked, the area surrounding Suzhou could work as a “Second Front.” A massive stretch of mountainous terrain that included parts of Guizhou, Qinghai, Gansu, Yunnan and Sichuan provinces would serve as the “Third Front.”[6] China’s nascent nuclear weapons program, including the Lanzhou Gaseous Diffusion Plant, also fell under the territory designated as the Third Front.[7] Figure 1 illustrates the geographic regions of the project. 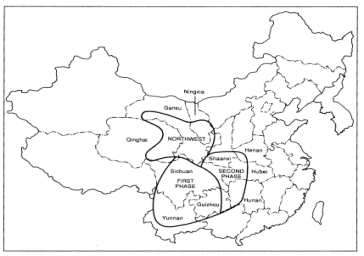 While there were several high-profile projects in the first phase of the Third Front, which lasted until 1969, this paper emphasizes the creation of transportation networks in the region that revolutionized how resources were moved across western China. Naughton claims that the Panzhihua iron and steel complex was the “keystone” of the Third Front.[8] Mao’s own statements during the 1960’s support this view. In 1964, Mao told a meeting of the Communist Party’s Central Committee: “Unless Panzhihua Steel Plant is fully developed, I cannot go to sleep at night. If there is no Panzhihua Steel Plant, I will have to ride a donkey to my meetings.”[9] However, this project could not exist without the development of rail infrastructure. Development was accelerated on rail lines in the southwest, with the Chongqing-Guiyang and Chengdu-Kunming lines, completed in 1965 and 1970 respectively, being the most important in linking the region together. The Chengdu-Kunming line alone cost 3.3 billion yuan, or nearly 21% of the national budget for capital construction in 1965.[10] The first phase of the Panzhihua complex cost an estimated 3.74 billion yuan.[11]

The factories and labor serviced by this new rail network were brought into the region using a strategy known as yi fen wei er, or “one divided into two”, which Naughton likens to an economic “mitosis.”[12]Tsinghua University students Bin Xu and Linxing Xiao use the Panzhihua complex as an example to demonstrate how this concept worked. “If there were two sets of equipment, move one to Panzhihua. If there was only one set, move it to Panzhihua.”[13] This idea was replicated for manpower, technical know-how, and financial investment from across China. Factories on China’s eastern seaboard would send a significant portion of their resources to the southwest and be left responsible for making up the difference in capability, whereas the newly transplanted western workforce received additional state investment to accelerate development. Figure 2 shows the massive spike of state investment in Sichuan province following the prioritization of Panzhihua after 1964.

The second phase of the Third Front, lasting from 1969 to 1972, occurred under the shadow of continually deteriorating relations with the USSR. The focus of the second phase was on machine building, with its centerpiece project being the No. 2 Automobile Plant in Shiyang, in Hubei province’s northwest region.[14] Reflecting the security concerns of the central government, additional plants in the area were hidden deep in mountain valleys and even caves to minimize potential damage from airstrikes. Three critical rail lines were constructed during this period in order to facilitate the transit of labor and material resources; the Luoyang-Yangtze, Hunan-Guizhou, and Chongqing to Wuhan (via Ankang) connections.[15] The Third Front’s national significance, and level of national investment, was as high as 45% in 1966, but dropped again as the decade came to a close.[16] The total proportion of national investment into the Third Front during the Fourth Five-Year Plan, from 1971-75, was 41.1%.[17]From 1971 onwards, changes in the larger political environment lead to a dismantling of many of the Third Front’s ongoing construction operations. Domestically, the fall of program architect Lin Biao played a role. However, more important was the softening and eventual normalization of diplomatic relations with the United States, whose previous perception as a strategic threat was a major justification for the entire Third Front.

Economic data on the total government investment during the Third Front is difficult to calculate, in part because projects that fell under the military’s jurisdiction, like development of the Chinese nuclear program, were not included alongside regular construction data. C.Z. Lin, drawing from anonymous Chinese sources, estimates that total investment was 200 billion yuan.[18] The two largest companies to have developed out of the Third Front era are Panzhihua Steel and Dongfeng Motor Corporation, the latter of which stems from Shiyang’s Automobile Plant No 2. Dongfeng, China’s second largest automobile producer, posted a 2012 net income of $1.3 billion USD. Swedish automobile firm Volvo bought a 45% stake in the company the following year.[19]

One of the lasting positive legacies of the Third Front era is the existence of rail infrastructure across China’s western provinces, which were an inevitable step forward in linking the region’s economy with the rest of the country. Despite this, the way in which these projects were undertaken dramatically inflated their costs and misallocated resources. Historian Robert Cliver notes that the decision to make Third Front rail lines a priority above all others diverted progress from the rest of the country’s national rail network. The result was that cost per kilometer of rail infrastructure on Third Front projects was five to six times the national average.[20] The largest source of developmental issues within the Third Front likely came not from the sheer cost of the project, or even from its remote location. While these were serious issues, the construction principle of sanbian, or what Naughton identifies as “three simultaneous”, was the most damaging.[21] This concept of simultaneously designing a site, constructing it, and producing from it ensured that proper site planning was often not conducted. More importantly, it led to additional costs from avoidable errors that slowed down overall production. An additional 40 million yuan was pumped into the Chengdu-Kunming rail line from the late 1970s to the mid-1980s to provide the manpower necessary to fix track deficiencies.[22]

If the Third Front era is judged purely on whether it made China more prepared for war with the U.S. or the Soviet Union, it can be regarded as successfully accomplishing its key objectives. It spurred investment into China’s mountainous west, led to the fortification of industrial sites, and generally created an economic base designed to support an extended war on the mainland. It fulfilled the purposefully vague objective set out in the State Planning Commission’s Third Five Year Plan, which sought to “strengthen national defense and make breakthroughs in technology.”[23]

However, the Third Front development strategy was based on short-term strategic concerns at the cost of long-term economic growth. Projects with flawed designs and the drawing away of wealth from China’s eastern seaboard made the Third Front an undeniable economic failure. Naughton draws on statistical analysis conducted by Chinese economist Chen Dongsheng to illustrate the misallocation of resources that drew growth away from the east coast. Using Chen’s data, Naughton estimates that “China’s industrial output is 10-15% below what it would have been if the Third Front had never been undertaken.”[24] Thus, while the Third Front was an economically unviable project that placed a heavy burden on the Chinese economy, it demonstrates how seriously Mao took the perceived strategic encirclement the country was facing from the United States, Republic of China forces, and the Soviet Union. Further analysis of the Third Front is a valuable endeavor for those studying both China’s economy and the history of its international relations.

Mohanty, Deba R. “The Chinese Security Dilemma in the 1950s and 1960s: Story of the Third Front.” Institute for Defense Studies and Analysis, January 17th 2011. http://www.idsa-india.org/an-jan-4.html.